Based on Cherry Clafoutis on The Food Network Kitchen

After completing my Hot Chocolate Bourbon Balls and boxing them up until they were ready to eat, I rummaged through my refrigerator to see what I needed to be used before I had to throw it away. I found that I had seven apricots that were showing signs of becoming overripe and five eggs that were past their expiration date.

When I was a child, we adhered to the expiration dates on food. If it was May 25th and the expiry date read May 24th, into the trash the food went. For most of my life, I have strictly followed this policy; however, I ran across a chart in Prevention Magazine that would actually help me save money by listing how far past the expiry dates food is usually good for.

My eggs were slightly past the four week mark, so I decided to also use the water test. Fill a tall glass or bowl with cold water and place the egg on it’s side in the water. If the egg sinks to the bottom, it’s still good. If it flips on one end and floats to the top, you should discard them. Thankfully, my five eggs were still good, but I wanted to make sure I used them within the next day or so.

I had gotten a pop-up from the Food Network Kitchen with an ad for a cherry cobbler, but when I clicked on it, I was redirected to a list of cherry recipes. I quickly scanned through them looking for something I could use most of my eggs on and came across the Cherry Clafoutis.

What is a Clafoutis? Well, as you might expect, it is a French dessert. Some described it as a custard or flan, while others described it as a crepe, which traditionally also has dark red cherries and is dusted with powdered sugar. Unlike a flan or custard, the batter contains flour, so personally I wouldn’t classify it as a custard. I decided to give it a try, simply for the reason that the recipe called for three of my five eggs.

I only had seven apricots, which would not come close to the 2 cups of fruit that the recipe called for, so I decided to combine apricots with the cherries to make up the difference. I chose to leave the skin on the apricots, but you can peel them if you wish. According to Wikipedia, if fruit other than cherries are used in a clafoutis, it is then called a flaugnarde.

I discovered I also did not have the half and half or cottage cheese that was called for, so I decided to use Greek Yogurt, milk and heavy cream instead. I was surprised to see that this recipe did not call for any vanilla extract or any other type of added flavoring for the batter, so I decided to add some Cherry Bitters to give a little extra flavor.

Most Clafoutis are baked in a round or oval pie pan or the traditional cast iron pan, but I opted for a 13 x 9 rectangular glass baking dish. This was simply for convenience sake. It’s easier to store leftovers in the refrigerator when you use a square or rectangular dish.

When comparing similar recipes, I noticed that some instructed you to heat the pie dish or cast iron pan in the oven with butter, and I realized that the recipe was actually somewhat reminiscent of a Dutch Baby Pancake. I decided to go with the instructions of the original recipe and greased the baking dish, arranging the fruit in the bottom.

Pour the mixture over the fruit and bake for about 40 minutes. If you select a smaller baking dish, you will need to adjust the baking time to account for the increased depth of the batter. As it bakes it will rise and become crispy and brown on the edges, while the center does have a somewhat custard or flan-like texture. Once the Clafoutis is removed from the oven and begins to cool, the puffed up center will fall, just like a souffle. It is usually served lukewarm and dusted with powdered sugar.

While this is classified as a dessert by the French, I believe that this could also be served for breakfast or brunch, since it is not overly sweet. Like the Dutch Baby, you could also serve it with a wedge of lemon or a bit of lemon zest in addition to the powdered sugar to bring a little brightness to the recipe. 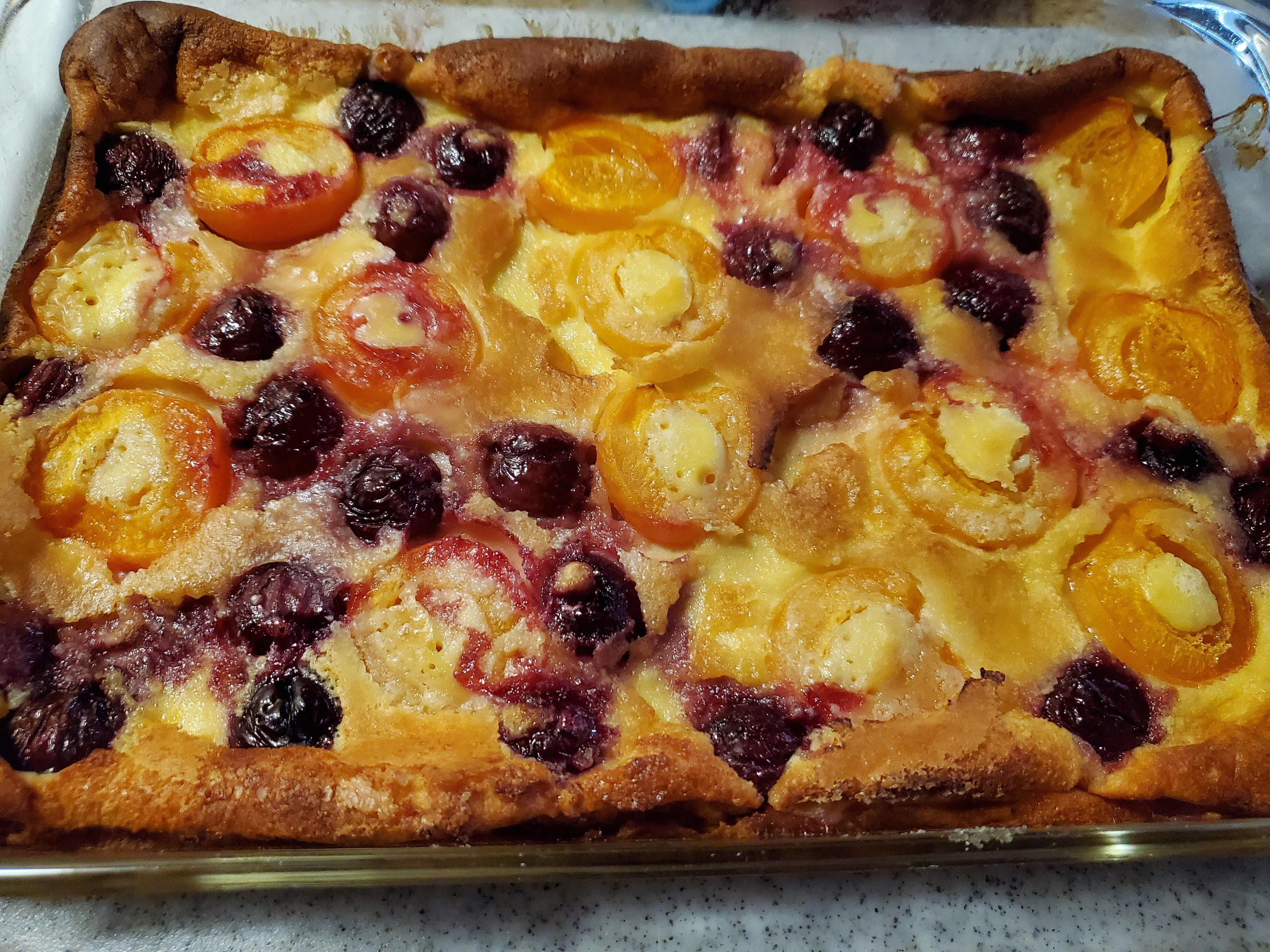 Credit: Based on an Original Recipe from The Food Network Kitchen