I’m back. I took a small break from baking during this quarantine. One of the only things I miss about having to go to work, is being able to take in most of my baking, so I don’t pack on the pounds having to eat it all on my own!

Half of my heritage is Czech and German, hence all the Eastern European recipes. As a child, we ate mostly foods and desserts from these two countries. For Thanksgiving, it was Roast Goose or Roast Duck with dumplings and sauerkraut, although we did have cranberry sauce on the side. Grandma baked miniature pumpkin pies for my father and me, because we were the only two who ate it. For Christmas, we ate Svíčková or Sauerbraten (Roast Beef, pickled and served with a cream sauce) with spätzle and sauerkraut, but we did have fruit cake alongside all of our other cookies. We did bake brownies and chocolate chip cookies, but most of our desserts were of Czech heritage, with the exception of Schwarzwälder Kirschtorte (Black Forest Cake).

I was first introduced to it when my mother bought it as our birthday cake when I was in grammar school. My birthday was the day before my mother’s, so we just had one celebration. She bought it from Kirschbaum’s Bakery, although they used baking Kirsch, which is non-alcoholic. We would would also drive up to Milwaukee, Wisconsin to our favorite German Restaurant, Mader’s. My mother and sister would both order the Rheinischer Sauerbraten, while I would always order the Wiener Schnitzel. We looked forward to going here at least twice a year and would always order their Schwarzwälder Kirschtorte for dessert. We even made friends with one of the waitresses and they gave us the recipe for their original Reuben Rolls. (They have since updated their recipe and use wonton wrappers, instead of batter.) Just thinking about their food, is making my mouth water.

In the Mader’s recipe, maraschino cherries are used as a decoration on top of the cake and the only cherry flavor throughout the cake is the Kirschwasser (cherry brandy). When I vacationed in Germany, we went to the Black Fores which is in the Baden-Württemberg region of southwestern Germany bordering France. We stopped at a Bäckerei (bakery) and gift shop which sat nestled inside the Forest. It looked exactly like a cuckoo clock, which the region is also known for. My friend and I watched as other patrons walked away with huge slices of Schwarzwälder Kirschtorte large enough to serve at least three people, and decided to split one between us. They sliced a thick wedge of cake, which had big chunks of cherries between each layer, and then sprayed the slice with more brandy. You could tell that the black cherries and whipped cream frosting had also been liberally dosed with the Kirschwasser, which is 42% alcohol! Not for the faint of heart.

Now if you are a professional baker, you will probably shudder at my next statement. It’s okay if you use a boxed cake mix. Yes, cakes are very easy to make from scratch. Boxed cake mixes really only contain the dry ingredients (flour, sugar, salt, baking powder and baking soda, and some sort of dry flavoring), which most bakers have in their pantry anyway. Some people can taste the difference and some can’t. I was raised on boxed cake mixes and as long as you don’t over mix or over bake the recipe, they are usually very light and airy. My mother would only buy Duncan Hines Cake Mixes and on that point I agree. In comparison, I have used both Pillsbury and Betty Crocker and find them to be much drier. So why am I talking about cake mixes? I used Duncan Hines Devil’s Food Cake Mix for this recipe and the result was a light and airy cake. Black Forest Cake is a dark chocolate cake and that is exactly what Devil’s Food cake is. Don’t worry, I will provide you with the recipe for the cake, but there is no shame in “the box.”

Even though the original recipe only had the cherry as a decoration, I decided to add cherries inside the cupcakes as they did in the Black Forest. Since you can’t layer the cupcakes, you will want to scoop out a hole to fill the cupcake. You can just use a knife, but you can also use an apple corer or a grapefruit knife to create this channel. I used a grapefruit knife, because the serration and curve of the blade will aid you in lifting out the excess cake. As you are baking your cake, you will want to prepare your cherries and glaze or syrup. The glaze or syrup is going to be brushed over the warm cakes. The basic recipe is water, sugar and Kirsch, but you can substitute the water with the liquid from the canned cherries to get a more pronounced cherry flavor in the cake. You can use a cherry syrup or baking Kirsch instead, but if you want to make a true Black Forest Cake I would use the real thing. I couldn’t find Kirschwasser at BevMo in Los Angeles and didn’t feel like wandering from liquor store to liquor store, so I ended up ordering it from Wine.com.

For the glaze and cherry filling, you will need two – 14 ounce cans of cherries. Make sure you get the ones that are packed in their own juice or water. You don’t want the ones packaged in syrup, because don’t want the added sugar. Divide the cherries, saving 20 to 24 for decoration and the remaining will be used for the filling. In an effort to save money, I made the mistake of purchasing a generic brand of cherries for the filling and ended up with pale, almost tasteless, cherries! Thankfully, months ago I had bought a couple of bags of fresh cherries and made Homemade Maraschino Cherries. Unfortunately, the cherries were long since gone, but I saved the “juice” which was full of flavor. I discarded the liquid from the canned cherries and used the maraschino liquor instead of water for the glaze and filling, decreasing the total amount of sugar. If you ever have to make a substitution like this, add the sugar slowly and taste as you go. You can always add more sugar, but you can’t take it out. For the glaze, heat the cherry juice and sugar until the sugar dissolves, remove it from the heat and add the Kirsch and allow it to cool.

You can simply stuff the cupcakes with the drained cherries, or you can use the remaining cherry juice and cherries make a syrup filling instead. Once again, no judgments here, If you want to skip this step or don’t have the time, you can use canned cherry pie filling. I would suggest sour or tart cherry pie filling for this recipe, as the tartness of the cherry will even out the sweetness of the rest of the cake. You would just add the Kirschwasser to the pie filling, and omit the other ingredients from this step. If the filling becomes too runny after adding the brandy, you may need to heat the filling to thicken.

Once the syrup is cool, you can brush the tops of the cupcakes while they are still warm. You may need to do this more than once, so the flavor permeates the cake, but not so much that the cake becomes soggy. If you are unsure, use one cupcake as a tester. Remove it from the tray and wrapper, brush or spritz the cake with the glaze periodically to see how much you want to use on the remaining cakes.

One thing I love most about this cake is the whipped cream frosting. Now if any of you have ever whipped your own cream for any type of dessert, you know that you need to stabilize it somehow; otherwise, as it sits, the cream will start to weep and you will have a soggy mess! One way of stabilizing the whipped cream is to add one teaspoon of unflavored gelatin in one tablespoon of water or liquor and heating until the gelatin dissolves, then adding this to the heavy cream and sugar and whipping until stiff peaks form.

Another way is to use cream cheese or marscapone cheese to stabilize the heavy cream. Regular cream cheese does have a slight tang to it, so it will alter the flavor of the frosting a little, but marscapone is a sweet Italian cream cheese that is used in many Italian desserts and blends very well with whipped cream. The resulting frosting has a slightly thicker consistency, somewhere in between whipped cream and buttercream, and has a richer flavor. The original recipe for Marscapone Whipped Cream Frosting is by Leslie Kiszka at Stress Baking.com.

I admit, there are a lot of steps to this recipe (cake, syrup, filling, frosting and decorating), but if you manage your time well, it’s not that hard. You can make the cherry filling the day before and the cherry glaze before you start baking your cupcakes, so it is cool enough to apply when the cupcakes are done. Once the cupcakes have been soaked and cooled, the only thing left to do is to assemble and enjoy! 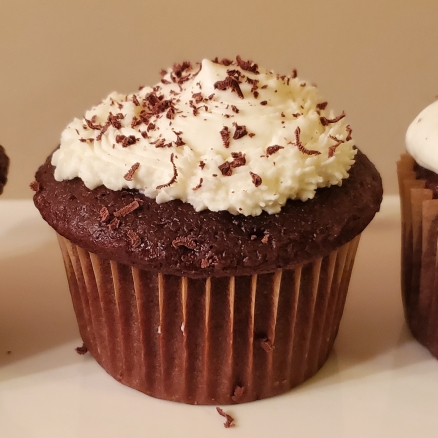 For the Cherry Filling and Glaze:

Credit: Based on Stress Baking by Leslie Kiszka