Based on recipes from The Czechoslovak Cookbook by Joza Břízová

There are so many versions of this cookie or pastry, because it can actually be both. Growing up, my mother had two versions, one that was like a thumbprint cookie and was crumbly, while the other version was rolled out and tasted more like dough for a danish pastry. Since then, I have come across recipes that include yeast, hard boiled egg yolks, cream cheese, ice cream and chocolate.

This is one Bohemian recipe that caught on in the United States when the Czechs immigrated. It is extremely popular in the Midwest, because that is where most of the newcomers settled. I was surprised when I moved to California and would bring in Czech recipes to work, no one had ever heard of them, yet everyone had heard of the Koláčky, even though they didn’t know from where it originated.

Now let’s talk about the elephant in the room…prunes. Koláčky are usually filled with a variety of jams or pie fillings, poppy seeds or cream cheese. This is one reason they are usually compared to a Danish. Growing up, my mother used Bohemian Kitchen Pie Filling, whereas my grandmother preferred Solo. We use to use apricot, pineapple, cheese, rasperry, and yes…prune. I wasn’t a big fan of the prune as a kid, but as I got older, I actually began to like it. I couldn’t find either when I moved to California. Unfortunately, Bohemian Kitchen no longer exists, but you can still buy Solo on Amazon. Since I wasn’t a fan of the Solo brand, I actually found Simon Fischer Prune Butter.

The problem I think most people have with prunes is that it is a very heavy flavor. People like plums, but they don’t like prunes. Even though I had finally learned to like prunes, I still only used this prune butter once a year when I made Koláčky and I was wondering if there was some way of improving the flavor. When I was looking through The Czechoslovak Cookbook, I found that they had actually included a recipe for a prune butter filling. Rather than just opening a jar of jam and spooning a teaspoon onto the cookie, I decided to try this recipe also. You can make your own prune butter from scratch, or you can start with a jar of store prune butter as I did. The recipe called for lemon or orange zest, but I used lime zest instead. You also add cinnamon and rum, and it tasted wonderful. It had a brightness to it that it usually doesn’t have. Now for the cookie.

I have always been partial to my mother’s thumbprint recipe, but I decided to break the habit and try a recipe I had not made before. Now the original recipe was actually for a cocoa ball (Kakaové Dulkové Koláčky), but since I had decided to go with such a strong flavor for the fruit filling, I decided not to flavor the dough with the cocoa powder. Also, most Czech baking calls for lard. Lard will give you a very flaky pastry, but you can substitute vegetable shortening instead and it will be just as flaky.

One of the difficulties with this dough is that even with the amount of lard or shortening, the dough is very dry and can be very difficult to work with. When you form the ball of dough, the recipe suggests using the end of a wooden spoon to make the indentation in the middle of the cookie. When I usually make my mother’s recipe, I use the end of my mortar, dipping it in water in between. I tried to do the same with this recipe, but the dough is very fragile, so after scooping it, I found that I had to squeeze it a bit to form the ball. I decided that it would just be easier to just press my finger into the ball at the time I was compressing the dough in my hand. Of course, that does mean that all the cookies aren’t going to come out looking perfect. Embrace the imperfection, because it doesn’t have to look perfect to taste good!

Surprisingly, this cookie is baked for 20 to 30 minutes. At first, I thought I had misread the instructions, but I hadn’t. It is baked low and slow, like barbecue, at 275 degrees. Like other cookies, you just want to make sure that you take them out when they just start to brown on the bottom.

I hope you try this. Don’t be scared off by the prunes! 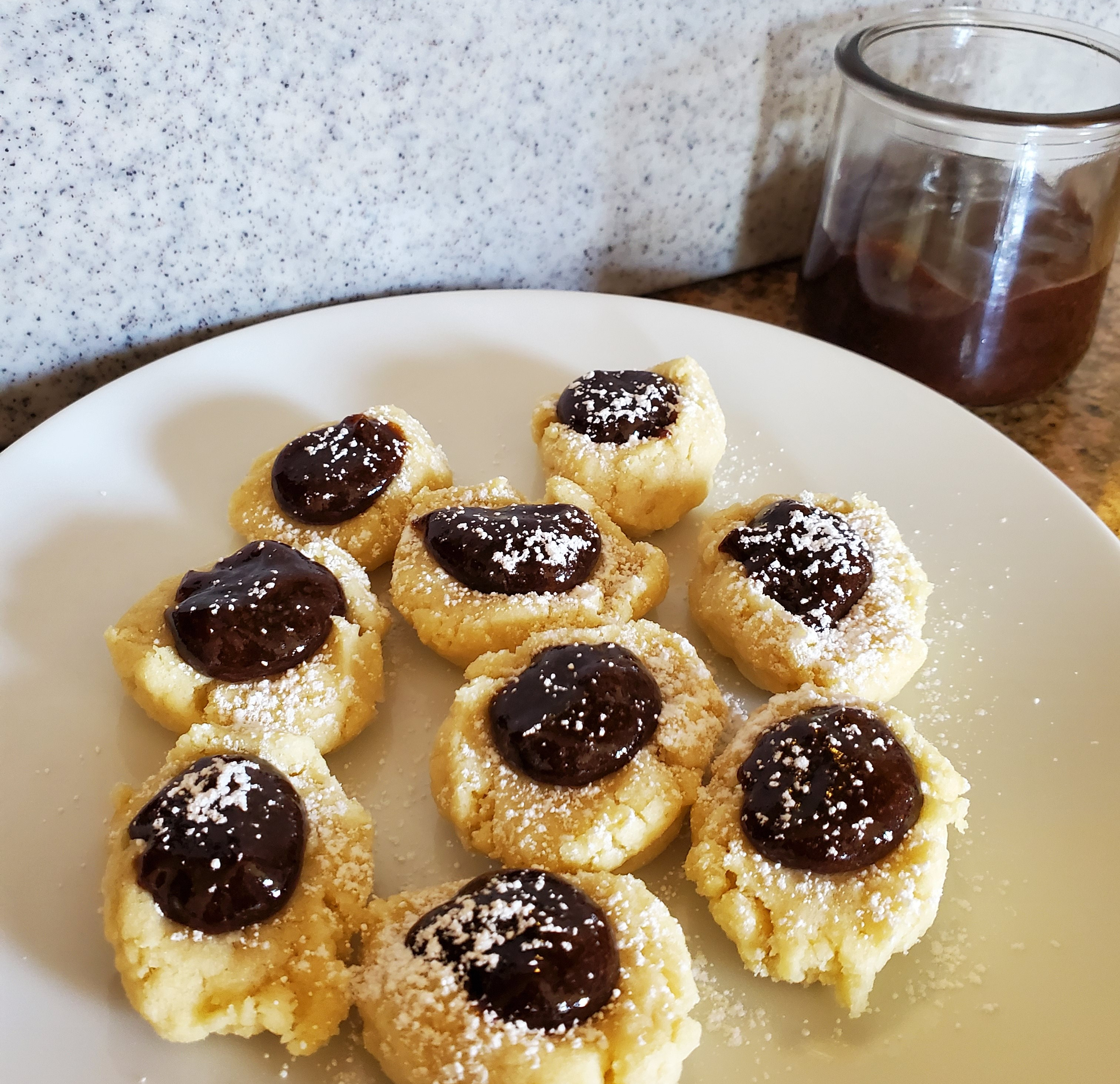 For the Prune Butter: